Much to the embarrassment of my parents, I have a few tattoos.  I have always liked tattoos even when they were not as prevalent as they are now.  Back in high school one of my friends turned 18 in December, and one of the first things she did was get a small ladybug tattoo.  I think she was one of the first people my age that had gotten a tattoo.  I thought it was awesome.  That same friend has several tattoos now, and we even went to get one together, 10 years after graduating high school.  Funny how things work out!

Being a mostly obedient and eager to please daughter, I waited until I was a full-grown married woman before getting my first tattoo.  They had to have seen it coming, though, seeing as how my husband has several tattoos himself.  My brother, the rebel, got a giant arm tattoo whilst still living at home at age 18.  Sometimes I wish I had his chutzpah.  Anyway, I got my first tattoo on our honeymoon in Mexico.  It is a Mayan symbol for transition, and since we were on our honeymoon {making the transition into married life} in the Riviera Maya, we thought it was fitting.  I got it in the tramp stamp location, and it’s about the size of a small Post-It note.  Zac has the same tattoo on his left shoulder, but it’s about the size of an index card.  I have never been able to find a picture of the symbol itself, but it looks like the center of the Hunab Ku, enclosed in a rectangle. 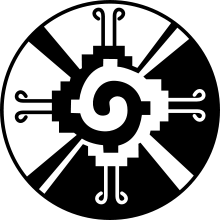 Perhaps I’m too trusting of what tattoo artists in Mexico tell me.  But whatever.

I got my second tattoo on our one-year anniversary trip to Gatlinburg.  It is a very cliche angel wings between my shoulder blades.  I would love to get this one covered up, but haven’t figured out what I want to do there yet.  My third tattoo {mentioned above} is an Olde English B on my hip.  In college, there were four different Rachels in my sorority, so if you wanted to get a particular Rachel’s attention, you couldn’t just say “hey Rachel!”  So we all had some sort of extra name to differentiate us.  I started out as Rachel B. but quickly became just plain B.  People from college still call me either Rachel B. or B to this day.  I got the tattoo on a whim so it was the only thing I could think of at the time that had any sort of significance and would take less than an hour.  I’m sometimes impulsive like that.

I got my most recent tattoo in April whilst in Austin, TX with 46 of the best friends I’d never met before.  Three of us decided to head into Austin proper for some new ink.  I researched and found a place that got great reviews with a couple of artists that specialized in the type of work I wanted.  So we made our appointments and drove into the city one afternoon.   I had been talking about getting a traditional nautical sparrow/swallow tattoo in memory of my grandfather, who was in the Navy as a young man {and, ironically, did not have any tattoos}.  My artist drew me up a sample, talked me into going a bit bigger than I had originally planned, and went to work.  I think it turned out nicely.

In addition to being a small reminder of my wonderful grandfather, this tattoo is a symbol of one of my favorite hymns, His Eye is On the Sparrow.  The hymn is based on Matthew 10:29-31:

Are not two sparrows sold for a penny? Yet not one of them will fall to the ground outside your Father’s care.And even the very hairs of your head are all numbered. So don’t be afraid; you are worth more than many sparrows.

This hymn has always been special to me.  It helps me feel that no matter where I am, however far away from family and friends I may be, someone who loves me is watching over me.

Now, as to whether it is a sparrow or a swallow, I don’t really care.  I’ve always thought they were sparrows, but when I started reading more about traditional nautical tattoos I learned that they were actually swallows.  So whatever.  When I want it to be a tribute to my PawPaw, it can be a swallow.  And when I want it to remind me of my favorite hymn, it can be a sparrow.  I’m breezy like that.  It’s not like I’m trying to call a turtle a dog or anything.  And if people can get the Tazmanian Devil tattooed on their body in earnest, then I can have a sparrallow.

There, I just made up a new word.  You’re welcome.