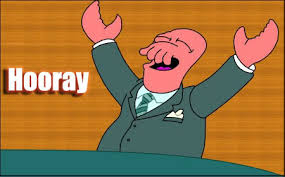 It has been quite a week for our little Cole-train!  He has hit two very big milestones:  he went poop on the potty AND pee-pee on the potty!

The poop on the potty was a complete fluke, but by Cod Pitcher I’m still counting it!  On Monday when I picked Cole up from school, I noticed on his daily log sheet that he hadn’t pooped all day.  On days like that I tend to watch him more carefully in the evenings because I know he is going to poop.  Well, he didn’t poop all evening, and then it was bathtime.  I am usually able to run around the bedroom and do other things while he plays in the bath, but this time I figured I had better stay in there with him in case he decided to let one fly in the bathtub.  Sure enough, he started making his signature poop face.  I asked him if he had to go poop, and he said no.  A couple more times he made the face, but insisted that he didn’t have to go poop.  Then finally, I knew he was about to go, there was no stopping it.  So I grabbed him up out of the tub and set him on his potty.  And he went poop!  ON THE POTTY!  Of course we went crazy with praising him.  I know it wasn’t on purpose, but hopefully this will be the start of him making the association that poop goes in the potty.

But last night was NOT a fluke!  Last night Cole went pee-pee in the potty (urinal, actually) on purpose!  And I MISSED IT.  We went to Discover Mills last night to check out Motherhood Maternity to see if they had any dresses for our photo session on Saturday morning, and afterward we just walked around a little.  We saw a store full of inflatables, and it was $7 for a half hour of bouncing.  Since Cole had been in the stroller for an hour, we figured that would be a good way for him to bounce out some energy before heading home.  So he bounced and bounced.  It was great fun to watch.  He even climbed all the way up the giant inflatable slide and slid down all by himself.  Over and over and over.  He was worn out by the time he was done bouncing.  Best $7 spent ever.  We stopped by the restroom on the way out (because, being pregnant, it’s what I do), and I took the stroller and the Mister took Cole.  I was in and out, and wondering what was taking them so long.  I could hear a lot of commotion coming from the men’s restroom, but couldn’t tell what was going on.  After a few minutes of waiting, Cole ran out to me and said “Mommy!  I went pee pee on the potty!”  I looked at the Mister, who confirmed that this was in fact truth.  Hooray!  I picked Cole up and swung him around and told him that I was so proud of him, to which he replied, “I’m so proud of you too!  Can we get some ice cream?”  It was a little late for that, but I did give him a marshmallow when we got home and made sure he knew it was because he used the potty.

We have been casually introducing him to the potty for the last few months, but boys take longer to potty train than girls so we haven’t really been pushing it very hard.  But even if these are one-time events, I can still see a light at the end of the tunnel.  He has proven to us that he CAN use the potty.  It’s now a matter of us finding the right motivator to encourage him to WANT to use the potty.  But now, I am hopeful that one day in the very near future, I will not have to buy two sizes of diapers at the same time.  I think we may try the Three Day Potty Training method over the long Labor Day weekend.  I know several moms who have had a lot of success with it, and what better time than a weekend we will both be at home for three days?  Wish us luck.